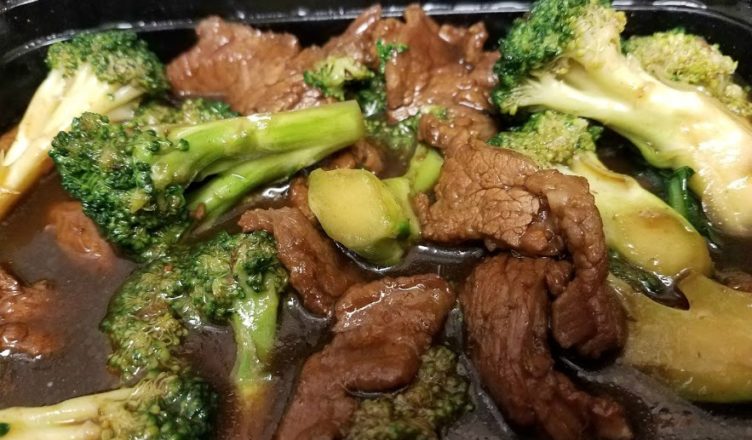 Let me start by saying, I was not surprised by the events that happened this night. Things like this happen to me so often I don’t even think twice about it anymore.

My girls were staying at my in-law’s,  my son was at a pasta party with his team and my husband was at work. We had been getting Chinese restaurant menus in the mail for the past couple of weeks, now I really had a craving for some beef and broccoli.

That’s it, all I wanted was an order of beef and broccoli. Nothing fancy, nothing extra, just that.

I had to make a stop at a store and decided to stop at the Chinese restaurant in the same plaza. This one has about 50 “Voted BEST” signs all over the front of it. Personally, I prefer the one in town, but parking can be tricky especially on a Saturday night.

I go in to place my order. There is only one lady at the counter. I thought, “Wow, this should be quick.”

Boy was I wrong!!

One of the kitchen staff comes out of the bathroom, gets his coat, says good-bye and leaves for the night.

It turns out that this lady’s order was given away to someone else. This place uses the last four digits of your phone number as an identifier for pick up…more to come on that later.

For 10 minutes the older gentleman is trying to figure out the issue. Then walks in super pissed off lady in her pajamas (at 6 PM). Mind you by this time there is at least 10 people in line behind me waiting to pick up their food and I haven’t even ordered mine yet.

Pajama Lady got the wrong order, she got the lady in front of me’s order, but why Pajama Lady didn’t bring the receipt with her is beyond me. She’s not pleased.

Now that’s not even the good part.

As that debacle is going on (and I still haven’t ordered anything yet) the worker that left comes back with another Chinese guy and he is NOT HAPPY!!!!

Angry Guy starts yelling from the door (in Chinese) all the way over to the counter. Another kitchen guy comes out and starts yelling back (again in Chinese). The older counter gentleman stops everything he’s doing and gets involved.

The lady behind me leans to me and said, “I think we picked a bad night.”

I had to tell her that things like this happen to me all the time.

Kitchen Guy opens his wallet and throws all the money he had in it at Angry Guy. Angry Guy and Worker Guy leave as Angry Guy continues to yell all the way out the door.

Now, the food mix up still hasn’t been sorted out. Now that that kerfuffle was over the older gentleman can focus on the extremely long line that has formed behind me (out the door).

Pajama Lady gets the correct bag and now No Food Lady has to reorder (a lot of food) and wait.

I go up and tell him I want beef and broccoli, that’s it. Thankfully he didn’t use my phone number. He gave me a beat up index card cut in half with the number 22 written on it.

I sit and I wait and I observe.

About seven take out orders later, a guy comes in to pick up his order and gives his number. As the Older Gentleman goes to give him the bag, the customer notices that there’s another bag on the counter with the same number. (I told you I’d get back to this).

Now since the customer wasn’t positive of the order, he wanted to call his wife since she called it in. He actually said he didn’t want to have to come back…if he only knew.

Upon the customer’s further inquiry  about the number situation we all find out that if two calls come in too close together than both orders get the same number. This lead me to think it’s time for a new system.

Why not use names like every other restaurant that has pick up?

After being at the restaurant for approximately 45 minutes, I got my order.  This left me a whole whopping 20 minutes to get home, eat and then leave to pick up Teddy from the party.

When I told Teddy about this on the way home, he laughed and told me “This better be a blog post.”

Here it is, a typical outing for The Kraus House Mom.

48 thoughts on “All I Wanted Was Some Chinese Food”