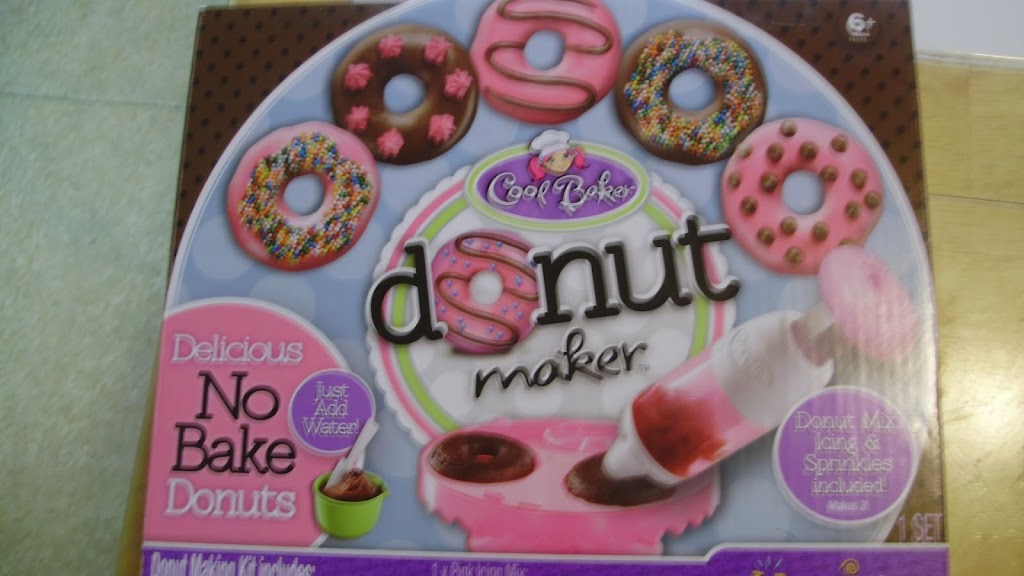 Stella got a Cool Baker Donut Maker for Christmas and was all gung ho about making them, unfortunately I was the final victim of the stomach bug that took out every last one of us and it got me on Christmas day; so Stella had to wait a few days until I could deal with the mixing, forming, and endless questions that would go along with this donut making experience.
I finally decided it was time to make the donuts (if she asked again I was going to lose my mind). I looked at the box, no bake. Well this just brightened my day, until I opened it and saw that I had to put EVERYTHING together. But before I could do that, I had to wash everything (definitely not one of my favorite household tasks to begin with). Much to my surprise I put it together lickety split. We’re ready to make donuts.
Seriously, all Stella had to do (I say Stella because she insisted on making them) was put water into the mix and stir. I was impressed.
Then she had to load it into the donut plunger thing, once again easy. Stella squeezed the donuts into the molds and then the hard part…waiting the 15 minutes for them to set.
Now I have to clean this thing again? I didn’t sign up for this. The donut goo was so thick that it came out quite easily, yeah me!!
It was 15 minutes of pure torture for Stella and her hungry customers (Teddy and Maizie). When the timer went off, I knew there would be no chance of naked donuts (I tried selling them on the idea…don’t you want them right now?).
Next, onto mixing the frosting, once again just add water. I loaded it into the plunger (I didn’t want frosting in the grout of the table) and Stella Van Gough got to work.
I didn’t think Teddy was going to be able to stand the wait. They finally got to eat the masterpieces, all three of them. They said they were good; I’ll take their word for it.
P.S. This was not sponsored in any way, this was just another adventure in the Kraus House.

12 thoughts on “Time to Make the Donuts”