In the middle of the night, Teddy came downstairs and told me he couldn’t sleep. Nothing new, so I told him to go back up to bed. I fell back to sleep for a few minutes and then had an eerie, creepy feeling. Teddy was just standing there, staring at me in the dark like Children of the Damned.
I told him to go on the couch and he then reminded me that the TV was locked. I came milliseconds away from giving him the code, but dragged my tired, unable to see ass out of bed in the middle of the night to punch in the code. If not he would stand there until 5:30AM when the TV unlocks (like the guys did on the porch in Fight Club).
Then later on, Stella made her nightly pilgrimage down to my bedroom. The night before I had the worst night sleep in a long time because she kicks and twists and turns and just hogs the entire king sized bed and I just did not want her in there. I sent her to the other couch with Teddy.
A little while later, the little girl who cried wolf came back in and told me she “didn’t feel good”. This was her fifth ailment of the night and the fourth time I was had been woken up (I was the most pleasant mother at this point). I told her to go to sleep.
I fell back to sleep and then Teddy woke me up a fifth time, this time to tell me that Stella threw up. You have got to be shitting me. I get out of bed (barely able to walk because I’m so tired) and grab a bowl, the cleaner, paper towels, a hair elastic and a towel. I make my way into the living room and it wasn’t as bad as I expected. I clean up, give her the bowl, give Teddy instructions to get me if she does it again and go back to bed.
It happened three more times. Then I hear Maizie get up, this is not going to be good.
I can hear something going on in my room, but since I once again didn’t get to sleep I’m still in bed (in my defense it is 6:30AM on a Sunday morning). She went in the living room, saw “the bowl” and that was the end of it; she won’t set foot in the living room for the rest of the day. She was sitting on the floor of my room reading a book and playing with the dog.
I gave her my tablet and she went upstairs. She will occasionally sit on the stairs and talk to us from just around the bend where she can’t see down into the kitchen. If she’s feeling brave, she’ll lie on the stairs and poke her head around to watch the kitchen TV. 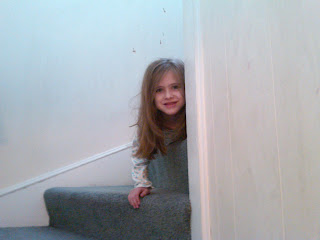 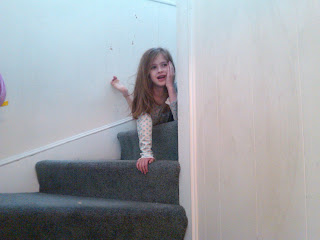 Ted decided to make pancakes for breakfast and Stella was disappointed but at least she knew enough not to try to eat them. She asked for a special batch be made and put aside for her to have tomorrow (I foresee a problem tomorrow morning). Maizie came to deliver my breakfast and wouldn’t even step near the threshold into the living room.
I have asked her in the past, “What are you going to do when your kids are sick?” She always replies, “Call Daddy.” She’s going to be in for a rude awakening when her kid randomly pukes up a whole bottle all over her.