The blizzard hit and when the kids finally went out to play, they decided they wanted the sled they got for Christmas the year before. (Of course it had to be inflated.) Once it was finished, they took it outside and they tried to go sledding. There really wasn’t much to sled on. Maizie tried to jump off the picnic table with it, but didn’t have much luck. Being crafty weasels, they started to build their own hill. All were having a grand old time. Then the last “run” of the day, Teddy drilled the back door with his head and packed it in (he was fine, can’t say the same for the door). 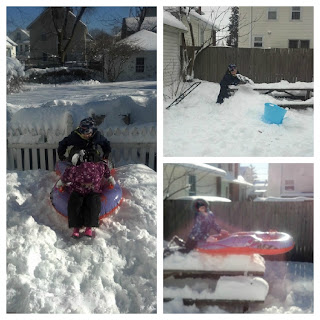 Stella is starting school after vacation and I figured she should probably make an attempt and wiping her own rump after she goes to the bathroom. She had gone to the bathroom and yelled, “I’m done!” I went in there and asked what she was going to do if she had to go at school. She said, “Well they can call you and you can come pick me up and you can bring me home and I can poop here.” I told her it wasn’t going to work that way and she was going to have to wipe herself. I told her to try it. You know what happened? Nothing. She can’t reach. She can’t get her arms to reach her tiny hiney. I told her it would be best if she just pooped at home.
There’s an understood rule in our house, don’t piss off Stella. She gets mad quite often, but when she gets really pissed off, she will seek vengeance (most likely in the form of physical pain). It seems the frequent recipient is Teddy. It starts out innocent and I hear it escalate to a scream, then a hit. The hit is usually followed by running footsteps and Stella yelling something inaudible. It ends with Teddy holding part of his body telling me that Stella did “something” to him.
This week was the 100th day of school and I went to help out Teddy’s teacher. He is so much bigger than everyone else in the class it’s astonishing. I always ask him if he pays attention in class and he says he does, I guess we have different views of what paying attention entails, because what I saw I would say wasn’t it. But the best part of the whole day was when I was upstairs waiting for Maizie. Her face when she saw me standing there was priceless. At home I asked if she was happy to see me, she said, “I wasn’t thrilled.”

One thought on “Kraus House Snippets”