Well after weeks of asking, Saturday was the first day of soccer for Stella.

She had been saying how she needed money (especially after the Tooth Fairy visited Maizie) and she NEEDED some dollars because her piggy bank was feeling light.

You see, my dad gives her a dollar for every goal she scores or if she makes a good move, this is her motivation.

She’s not just in it for the money, she laughs the entire time she’s out there; unless this one particular kid is in her way (she just doesn’t like him).

Frankly I think she likes the attention, there are six people cheering her on.

Saturday morning, she got up and couldn’t wait to get dressed.

I pull her together and then it’s the dilemma of what hairstyle am I going to wear?

Should I wear one ponytail, two ponytails or braids, every week it’s a challenge (she has even had me redo her hair because she didn’t like a style). She went with braids. 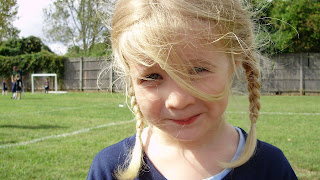 As I was getting ready I could hear her talking to Maizie and Teddy. She was telling them what they had to yell while she was playing. She wanted them to yell, “Go, go Stelly! Kick that ball!” I then heard Teddy inform her that he was not going to be yelling that (He did).

She takes this seriously.

We get there, sort through the chaos, and then she finally picks a field (she was dying to start kicking her ball) and she starts practicing.

She kept kicking the ball into the empty goal, I think she thought they were going to count toward her grand haul (they didn’t).

I put her shirt on her and it’s like she’s playing in a dress, she doesn’t care; she got a game to play. 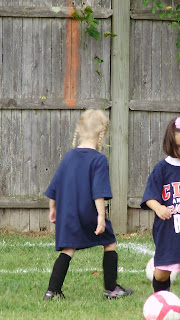 She ended her day with a total of two dollars, a pink frosted doughnut and a Gatorade; she was quite satisfied. 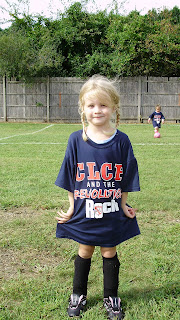