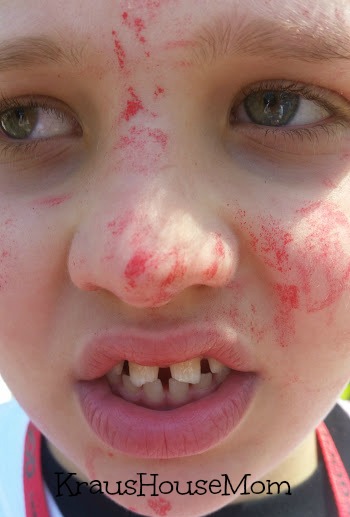 I’ve written about how Teddy went blind and the went blind again, well recently he knocked out his two front teeth. Okay, maybe that’s a bit of an exaggeration, but he did put two giant chips in them.

It’s not something common.

He didn’t fall off his bike or do it while playing sports or when he was at the playground. He did it as only a Kraus Kid can do, he did it on a mechanical bull.

We do a charity race every year. During the race we are “gored” by the roller derby girls. The use red paint and get you as you run by them. After the race there is a party and the always shave a mechanical bull.

Every Year my kids ask to go on it and for one reason or another they don’t. This year, there was no line, so I told them they could do it. There were TONS of kids much smaller and younger than Teddy that had already gone on it.

As the bull came up, Teddy face-planted onto it. Down he went and there went his teeth.

I thought he broke his nose and has expecting blood everywhere. No blood, but he only had half of his front teeth.

They weren’t loose and he didn’t expose the nerves, so I wasn’t too concerned.

I called the dentist the next day and since we didn’t get an appointment until the following day, I guess they weren’t all that concerned either.

Apparently it happens ALL THE TIME, because no one asked what happened. Teddy told everyone (of course) and then I got the side eye and asked, “Where was there a mechanical bull?” Once he told the story, everyone thought he was the funniest kid ever.

In comes the dentist, I’m thinking they are going to bond them.

Nope, his highness gets two crowns.

He is checking everything out, like a hawk and asking if they’re going to knock him out, I think

he was hoping. (They didn’t even numb him.)

He was nervously cracking jokes and then wouldn’t you know it, of course dentist falls in love with him.

I swear getting the crowns ready took way longer then getting them put on.

The only bad part is he can’t bite into apples or carrots ever again because he can snap he teeth right off.

Luckily he left the dentist looking as good as new. Now we just have to keep him from having to get a new nose.

28 thoughts on “Guess who Broke his Two Front Teeth”