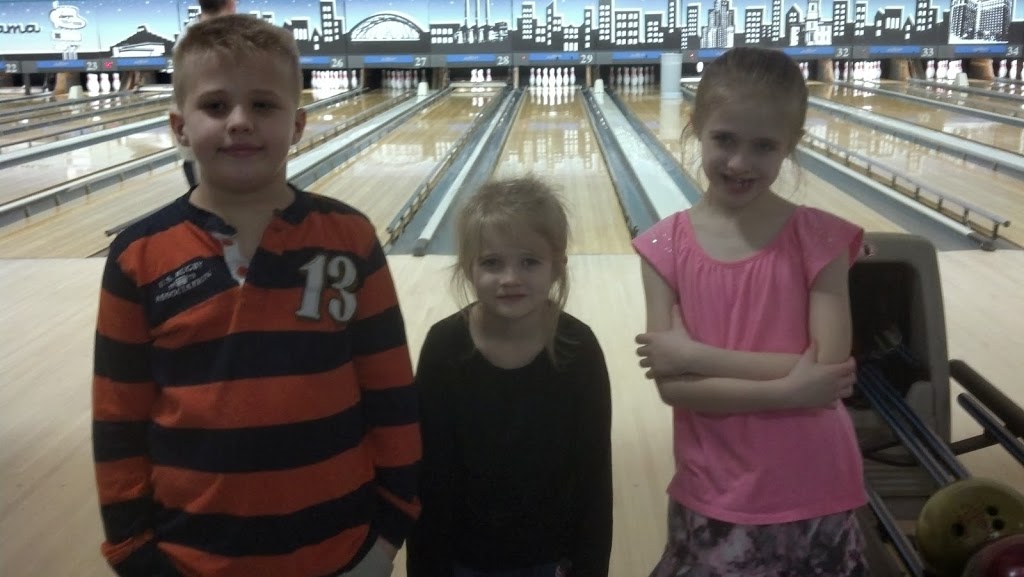 I love bowling. Whenever I go I have visions of a Grease 2 flash mob breaking out. Then I look around and realize, it’s all in my head. Here I am with my three kids, if there’s any dancing, it’s not going to be choreographed (or coordinated for that matter).
One of the bowling alleys near my house (there are two) was having a vacation special. Since Stella had never been and Maizie hadn’t gone since she was really little, whether or not they we going to have fun was a crap shoot. So this was a perfect opportunity to give it a whirl (and it wasn’t snowing).
We go in and they are fascinated. They always are whenever we go somewhere new.
We get our snazzy shoes on and go to gather our balls. The girls wanted to choose their ball based on color and Teddy wanted the heaviest ball he could possibly find. No, no, no that’s not how it works. Finally after some negotiations we had the balls we needed. The names were put into the scoreboard (remember when you had to do it with a pencil), the first ball ready to be thrown.
Oh wait a minute, I look down the alley and then at those three. Every single ball they roll would end up in the gutter, so we had the bumpers (gutter guard) raised. Teddy thought he was “the Dude” (despite the fact he had never been 10 pin bowling before) and promptly got his ball stuck mid-lane. Really? Are you ready for the pro circuit now? Once he listened, he got the hang of it.
Besides thinking he was “the Dude” he found the fact that he got to wear special shoes awesome. Then they deliver pizza and a “whole pitcher” of soda right to you. Not to mention he gets to throw heavy things. He got to throw things, eat some pizza, have some soda, throw things again, eat more pizza, have more soda and this went on for a couple of hours. He was loving it.
The girls developed their own technique for getting the ball to hit the pins. Apparently if you squat down and lean to the side you want the ball to go to while making a frame with your hands at the pins you wants to fall will, .03% of the time. A Stella made up a special “I hit some pins” dance. And Maizie made sure the balls that came up the return were organized by color.
I on the other hand did pretty well. Maybe it was the fact that I wasn’t drinking. But, I did get four strikes, yes you read that correctly, four strikes! I also got three spares but, those were absolutely because the bumpers were up. I may have scored the highest…EVER!!
We had a fantastic time and the kids can’t wait to go back. I did, of course, make some observations.

If you are there with two kids, it is NOT necessary to take four of the 6lb balls. It’s school vacation and those are at a premium. You sir are just an asshole.
The amount of excuses some people will make about why they did badly is amazing. “The ball slipped.” “I took too many steps.” “My finger got stuck.” Just get over it. Me, I just go with it and say, “Well that sucked!”
Sitting on the (only) step and blocking our way to go back and forth to get our drinks and pizza is just obnoxious.
The senior citizens that bring the assload of snacks crack me up; cookies, candy, coffee cake, you name it, they had it.