Posts from February 2012…Enjoy!!
Teddy got a ring pop. He ate the candy and saved the ring. He told Maizie he saved it for her so she could have it for her wedding.
Stella just came out with a blue tutu on her head and she said, “This is the kind of hair Katy Perry has.”
Stella’s tights keep falling down so I told her to get a different pair. She did and she just came and asked for help putting them on. I looked at her and told her to take off her shoes and old tights and I will help with the new tights. Her reply, “Give me a cracker and I’ll let you help me.” I just had to laugh at her.
The good thing about having a dog is that when you drop an entire bowl of macaroni all over the kitchen floor you don’t have to worry about sweeping it up, just whistle and tap your foot at the mess.
Seriously…what do the Kraus kids have against pants?
Stella has been sick all day and Maizie is having a hard time being in the same room with her. May has spent most of the day upstairs or in the kitchen. If she ventures into the living room, whenever Stella moans or coughs she high tails it out of there.
Teddy has taken on doing dishes. I’m not sure if he uses any soap when he does it. Another problem is when he’s done he puts the dishes he washed in the strainer with the other (actually clean) dishes and I’m not sure which ones were the ones he did.
Teddy’s dream last night…Santa was dressed up like a pig and he ripped off his costume and he growled at him, he was a wolf.
Teddy had been using soap to wash the dishes, hand soap.
How many 6 year olds do you know that will turn down a soda? I know one…Maizie Kraus, that’s who.
There is ample seating available in my living room, yet my kids insist on all sitting together on the love seat.
It’s so funny to listen to Stella tell stories that begin, “When I was a little girl…”
Since Stella excels at giving dirty looks, Teddy has now started calling her Stink Eyes.
Stella the rock star 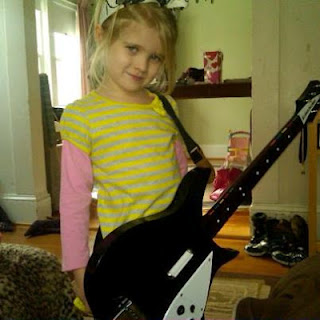 Since Maizie is a contagion she is missing school, so I am eating he Valentine cards (Skittles). Stella yelled at me, “DO NOT EAT ANOTHER ONE!!!” So I poured a whole bag in my mouth and mumbled, “Don’t yell at me or no Skittles for you”
Teddy just called me Bossy Boots because I’m making him do his homework. He’s lucky I’m being Mommy right now, because Mrs. Kraus is about to show up. Then we’ll see if he does his work.
It’s kind of sad that when I go to put Stella in the car she feels it’s necessary to cover and protect her head.
Once again Teddy started crying during a meal because he bit his own finger. This time I could not stop laughing.
So I’m on the computer (Pinterest of course) and Stella yells “I’m done” from the bathroom. I go in there and she’s sitting there with her crooked ponytails, faded face paint and the purple dress and brown leggings she’s been wearing for the past 3 days (don’t ask), as I step in the bathroom she looks at me and says, “I dropped a deuce” (thanks Ted). Once again I could hardly control my laughter as I told her that ladies don’t say that.
Ted came home from BJs with a package of paper towels. The girls were SUPPOSED to put them away. I heard a lot of laughing so I went into the kitchen. They took them all out of the package, stacking them up and kicking them over. Apparently “it’s lots of fun” to “stack these babies up”
Teddy has been sick since 3:30 this morning. He thinks he’s better, gets up and gets sick again. He actually walked into the wall and knocked himself over. Poor Teddy Bear. (Haven’t seen much of Maizie today)
I am so tired from being up since 330 and the kids keep asking me how to spell things and what certain letters spell. I told them I’m not in the mood top spell anymore. They asked what I was in the mood for and I said a nap. Stella said, “You can take a nap, I can take care of Teddy.”
I keep telling Stella to clean her mess but she can’t because she’s “making Teddy feel better” I asked Teddy if she was making him feel better and he said the only way she could make him feel better was to make mommy happy.
Maizie came in and asked if I needed anything (yes I know Maizie and not Stella). I said I was all set, and then I hear all this commotion in the kitchen. I asked what was going on and Maizie said she was making toast for Stella.
Whenever I bring home any sort of exercise equipment the kids immediately take it as theirs. They ask how to use it, get in “exercise clothes” and workout. While I just sit and watch. Today Teddy said, “Mommy, we need to work out everyday to be fit and healthy” all the while I’m thinking when can I take a nap?
The figure eight resistance band is now a baby carrier. 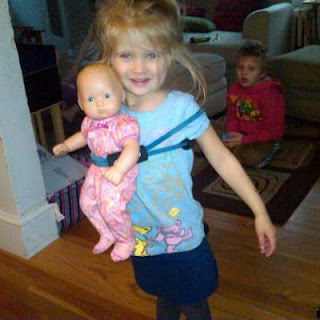 Stella is hooked on Pinterest. She gets a chair and stands next to me, then points to the things she likes on the screen.
Stella can get Teddy to do anything. She just asked for milk and I said no go get some water. Next thing I know Teddy is walking by with her Tinkerbell cup with water. He puts it on the end table and tells her, “Here’s your water Stella, you might have to sit in my seat so you can reach it.” She says, “You can just give it to me when I need it.” He agreed.
Friday Teddy has pajama day at school this was part of the conversation…
Me “You know you have to wear underwear on pajama day.”
Teddy (indignant) “WHY?”
Me “Because you’re going out in public”
Teddy “Did Maizie wear underwear at her pajama day?”
Me “Yes, she did”