Skip to content
Posts from January 2012
For a couple of weeks when Stella farts she turns her rump and says, “Smell that”. She did it tonight and we asked her “Where did you learn that?” She told us Lovey. I know that Lovey is one of her dolls so I say “Lovey is a doll and can’t talk.” She says, “No, Lovey is my reflection.”
Stella fell asleep in the car. I called her name to wake her up and she said “I’m right here”
Things you don’t want to hear from a 5 year old…1 How many band aids do we have? 2 Where are the dogs nail clippers 3 I’ll be right back, I need to check something
Maizie had an Awful Awful today and when she finished she told me if she had too many shakes she’d lose her waist.
There was a bird outside the window so I started tweeting to the bird and it looked toward the window. Stella says “Look he knows you’re speaking Spanish.” Really Stella, you haven’t watched enough Dora and Diego in your life to realize tweet, tweet, tweet isn’t Spanish.
Teddy and Stella have been fighting for about 20 minutes. She just went up to him and said, “What are we mad about?” He said, “You’re mad because I’m going to hit you with the Socker Bopper” (as he’s blowing it up). She says, “Oh”, hit him and walked away.
Teddy saw the “snow” outside and said “This snow is mine, I saw it first. You girls can have the next snow.” They’re asking if they can put their snowsuits on. By the time you do it will be gone.
One or more of the Kraus kids feels it’s necessary to leave teeth marks in the rolls of toilet paper. I’ve asked who does it and they all blame each other. Since no one has lost any teeth it is hard to determine the exact culprit. My theory is…when they all go in to brush their teeth, everyone takes a bite. I seriously don’t know what goes through their heads sometimes, how can that be remotely appealing?
Maizie just heard (on her Hello Kitty clock radio) that Katy Perry cancelled her appearance on the People’s Choice Awards. Maizie, not the best communicator, came downstairs and said she just heard Katy Perry was cancelled. Well Stella just had a breakdown; she thought she was never going to be on the radio again.
I just had to clean up a figurine the kids broke in the living room and left the broom in there while I emptied the dustpan. They of course claimed it as theirs. I heard, “Hold the tight rope, I’m coming across”. I looked in and Maizie and Teddy were each holding an end on an ottoman as Stella was about to attempt her circus act.
The sun just went behind a cloud and it got “dark” in the kitchen. Stella yells, “Mom, the power went out!” as she’s watching TV.
Teddy told me he wants to take me out for all the nice things I do for him. Since it’s far away I’ll have to drive and we’ll have to use Ginger (the GPS) so he can tell me where to turn.
I just put on Goonies and Stella (who has been forced to watch this before) said “I don’t want to watch your old movie.”
Whenever it snows Alabama brings in every toy she’s every left out there like she found something new. It was right there the other day and you wanted nothing to do with it, sprinkle a little snow on it and “OMG I found new toys!!!!!!!! I must bring them all inside right this minute!”
Things Stella has just yelled through a closed window…1. May, what are you standing on? 2. I’m putting on a dress because my panties keep falling down. 3. How did Teddy just make that snowball? 4. May, May (tap, tap, tap) Ppptttthhh!!! That window will probably need to be washed now.
Per Stella’s demand, we have been watching Tinkerbell movies. It looked like she was asleep so I asked Maizie if she wanted to go back to watching cooking shows with me. I hit the DVR button and unleashed the fury of Stella-Blue. She sat up and yelled, “I’m NOT asleep!” We put the movie back on to avoid any further conflicts.
Teddy just came in and said, “You know what I’m going to do for my nice mom?” Me, “What?” Teddy, “I’m going to go brush my teeth.” Me, “Without me asking?” Him, “I’m going to start doing things without you having to ask.” He walked out of the room then came in carrying one of the drums for Stella; he wanted to help her out, then went and brushed his teeth. Stella then went with him and brushed her teeth. What was Maizie doing? Going through my purse.
The game is on in the kitchen because Teddy wanted to watch the game. The girls are in there and they said, “We hate football” Teddy replied with a very loud, “I HATE YOUR CARTOONS!!!!”
Stella is obviously the boss. 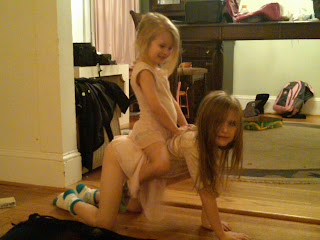 Teddy told me he wants to live with me forever. He said he’ll take me to the store when I’m old and buy me healthy food and pudding as a treat.
It amazes me how Stella can dress herself in a complex ensemble (usually picked out herself) while the older two can’t find the pair of socks that is sitting next to them.
Stella sounds like a 75 year old woman with a 3 pack a day habit and her zebra track suit and Phyllis Diller hair is just adding to the whole effect. 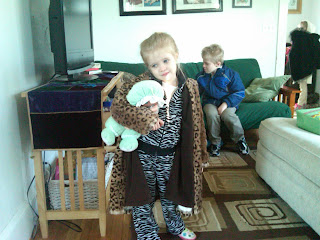 The kids are going through a bag of toys that the “Fresh Fairy” had taken away. Stella is running up and down the stairs with found toys like she hit the lottery.