Skip to content
Last night Stella had a bad dream (or so she said) and came to sleep in our bed. Later last night Teddy woke me up about six times. He kept telling me he couldn’t sleep, well go back to bed and lay down, I don’t have a problem sleeping and Stella is already here. You see Teddy has a habit of sleepwalking and most of the time he’ll just go back to bed and fall back to sleep, not last night.
One of his trips in he asked me to come sleep with him, I got up and brought my pillow with me. Well that woke the beast since she was hogging my pillow and followed us and started crying about how she needed to sleep with me. (Now the whole time this is going on Ted is sleeping soundly.) I stay a little while then go back to my bed. He returned and begged me to sleep in my bed; I gave in and was squished and awake for the remainder of the night.
Teddy got up this morning and I asked him what the deal was. He decided then to tell me he had a sore throat. Why didn’t you tell me that in the middle of the night instead of just staring at me telling me you can’t sleep? I would have given you some medicine. Way to make me feel like a jerk.
As the morning went on, so did his sneezing. I’m not talking a little sneeze here or there; I’m talking a sneeze accompanied with party favors and nose juice ALL OVER THE PLACE. I suggested he stay home from school; you would have thought I suggest he go to school naked. He kept insisting, “No I’m okay, I can make it.” I told him he was sneezing a lot and he said, “I’ll just bring some tissues.” Really? If someone suggested I should stay home, you betcha, where’s the remote?
After about a half an hour of trying to convince a five year old he needed to stay home, he gave in. I think once he had to wash up after he sneezed he realized it wouldn’t be a good idea; no one wants to be that kid.
He got to lie on the couch, all cozy and watch movies. Stella made sure to avoid the couch, she didn’t want his germs. 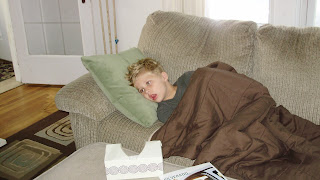