Skip to content
The remainder of 2011…enjoy!!!
Maizie has told me often she doesn’t like pretzels. The kids got some in their bags last night and I’ve been eating them. She asked for a pretzel and I gave her one. She kept putting it in her mouth and taking it out. Then she said she didn’t like them, within seconds she asked for pretzels for her snack tomorrow. I told her I wasn’t giving her pretzels so she could suck all the salt off and leave a pile of soggy salt less pretzels on her table.
Stella broke a glass in the kitchen so I told them they couldn’t come in without shoes on. Stella shows up in 5 inch Michael Kors booties.
Stella is walking with a remote control bulldozer like a dog and she keeps running it into Alabama and giggling.
There happens to be a police car parked on our street and Stella was acting up so I told her I was going to go get the policeman. Teddy’s reply, “She is wearing her jail dress” (She’s wearing a horizontal striped dress.)
I was walking upstairs and Stella (sensing I was leaving the vicinity) started following me. “Mommy where are you going?” “I’m going to hide” “Well I’m going to find you” “Of course you are Stella” I can’t even go upstairs without an escort.
Teddy refuses to eat anything that the girls have bitten because he doesn’t want “Girl Breath”. I’m not sure what this is, but he’s convinced it’s contagious.
My mom just said she was going to put balls on her wreath to decorate it and Teddy said “Balls!” and started laughing.
Maizie just told me that when I yell I sound like an Angry Bird.
My kids are screaming over who they see in the parade. Absolutely hysterical. According to Teddy the Wimpy kid is that way because he only drinks water and not milk.
I can’t believe that this dog has the nerve to shake her head when I told her to go lay down.
Boy, Teddy can’t stand the Bob’s Furniture claymation commercials. He yells at the TV every time they’re on, telling Bob how creepy he is. Then I, of course, rewind it.
According to Stella, Santa has 3 list-es. And she is on the cute list and those kids get toys. The kids on the nice list get new dog toys for their dogs, and the naughty kids get NOF-ING!!!
Teddy (our 5 year old): “Hey daddy, know why it’s called Christmas? Cuz if you’re naughty you MISS it. Chris was a really naughty kid!”
We were talking about Teddy’s bad dream last night and he said he dreamt about something ripping him apart eating him. Stella says, “I had a bad dream once, about robots.” End of conversation.
Maizie had a sip of my Dunkachino and proceeded to tell Ted how wonderful it was. She then got Stella hooked (Stella was licking the inside of the cover). Now she’s like an addict looking for a fix, she’s trying to get me to go to Dunkin Donuts and get another one (the whole time her eyes were bugging out of her head).
Do you know any kids who would play with the hose in this kind of weather? I do! Maizie is soaked and Teddy said they were making a tidal pool.
Elfel (Elf on the Shelf) brought a letter from Santa today telling the kids they need to take care of the toys they have and treat them with respect. Teddy and Stella were flabbergasted and Maizie was a bit annoyed.
Every night Stella takes all the toys and puts them on Maizie’s bed and she ends up covered in toys. I just thought she was doing it to be a douche. Nope, Teddy informed us she has been playing “delivery girl”.
About 2 months ago the cattle auction was on TV and I told Maizie that Teddy ordered a cow. Well apparently Teddy didn’t realize it was a joke and is still waiting for the cow to be delivered. He just said we’re going to have to put in a ramp once the cow gets here so it can get upstairs.
Teddy got the clothes I put out for him to wear today and he said, “Why do you want me to wear underwear?”
The kids are playing and Stella is apparently this poor little girl who lives outside and doesn’t have a lot of food. And she’s using a soft pathetic voice as she’s telling Teddy her sob story. I don’t know where she gets these ideas. I wish I had a video camera right now.  Then she said, “At least I’m beautiful”
The other night we were eating dinner and Teddy all of a sudden started to cry. He bit his finger…use your fork you Neanderthal.
We told the kids the tree need to fall before we decorated it. Teddy said, “The tree already fell when we cut it down.”
The kids are having some hot chocolate so I decided to put a couple of scoops in my coffee and Maizie caught me. “Are you putting hot chocolate in your coffee?” “Yes” “Well that makes it a Dunkachino, I LOVE Dunkachinos.”
Stella said, “Okay Teddy, now it’s time to lift me” as she’s picking up an ornament. I told her that Mommy or Daddy should be the ones to do the lifting especially around the tree. Her reply, “I have Teddy lift me all the time”
The kids are watching the Phineas and Ferb Christmas special that is on and they said how all of Danville was on the naughty list. Teddy says, “Mom, we don’t live in Danville do we?”
Stella just threw up and Maizie ran into hiding. Ted just had to coax her back to society.
Stella got dressed and then came in the living room with the crown on and said “This is what I was missing” 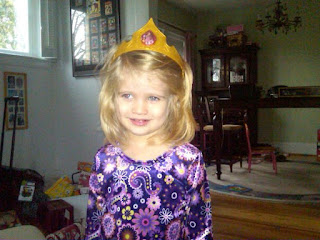 Teddy was just watching Hoarders with me and he looked at the houses and he said “What happened to their house?” I told him that’s what happens when you don’t pick up after yourself. He said, “That’s. sad” I told him that’s why we want him to clean up his toys.
Stella comes strutting into the room with a purse on her arm and says, “Here we go, high fashion” as she swept the hair out of her eyes. Oh boy.
Look at my hair, it’s decorated 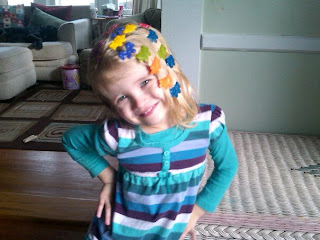