Skip to content
Today was the first day of school and the first day I had to be up and dressed early in a very long time. This morning may have been harder on me than it was on the kids; they’re up early every morning. I made them (okay, reheated…at least I had the forethought to prepare) chocolate chip pancake muffins with a side of sausage with syrup dipping sauce; did they eat it? No they did not, well of course Teddy did.
They got dressed and I had them pose in front of the fireplace with their signs (thank you Pinterest). I also had the forethought t wash the bricks of the fireplace since someone rubbed a FILTHY dry erase eraser all over the white bricks, what a chore that was; if you’ve used Magic Eraser you know you CANNOT clean just one spot. 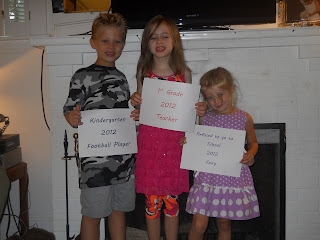 We left for school, in the rain. When it rains the streets around a school on a regular day become a fustercluck, one the first day of school it’s EPIC. Maizie gave her kisses in the car and I walked her in while Ted stayed with Teddy and Stella. Stella was not thrilled about that. We find her class, then I get her settled, give her a kiss and I’m out the door.
Teddy didn’t have to go to school until 12:30, so I made him take off all his clothes. He said, “So you want me to be in just my underwear?” I replied, “Why should this be different than any other day?” He kept asking when it was time to go, this was the same kid that was so nervous a few weeks ago, he couldn’t sleep.
Stella and Teddy had lunch and then I tried to get Teddy to poop before he went to school. This would be the best scenario for all involved. He’s like a frat guy after a two day bender and at school they only have that old school square by square folded toilet paper, just trying to do the whole community and my washing machine a favor here. He didn’t have to go; I guess I would have to keep my fingers crossed.
He was dressed; snack and backpack packed and ready to go 40 minutes early. I was able to stall him for 10 minutes, after that he was ready to walk out the door and go to school himself (he told me he knows the way). 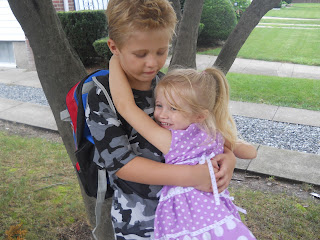 I had to tell Ted we needed to go. We get to the school yard and we weren’t the first ones there, I guess other parents didn’t want to hear “Is it time to go?” anymore either.
The kids all go in and I guess because of Teddy being Teddy, we hung back. The other parents did not. They were hovering around, peeking in the window, trying to get that last goodbye. Once the crowd died down I looked in the window to see where he decided to sit. All the boys in the class (all 6 of them) sat at the same table and Teddy looked like Baby Huey sitting there. Seriously, by the end of the year they may have to bring in a desk from the third grade for him to sit in.
At pick up, Teddy comes out looking like he’s ready to pass out; he could barely run across the street to the car. We get in the house and he still has his backpack on and he’s pouring himself a drink, if he was old enough he’d probably go for a scotch. You would have thought he worked 12 hours in the fields instead of two and a half hours in kindergarten the way he kept going on and on about how hard he worked. Dude it’s only the first day and it’s kindergarten, he’s going to have it tough when he gets older.
I checked Maizie’s lunch bag and the whole day she ate a small handful of sesame sticks, yup that’s it, oh and a juice box and a milk. That’s it! Pretty much her entire lunch was still intact, so I did what any good mother would do; I stuck her whole lunch bag in the fridge for tomorrow.
Overall they had a good day. Teddy said he liked it and he’s going back tomorrow. That’s good because you really weren’t getting a say in that decision. 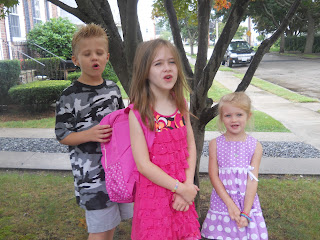 One thought on “The First Day of School”