Skip to content
Well the time has come; Maizie has lost her first tooth. It’s about time, it’s been loose for months; the dentist told her 4 months ago it was loose and it’s been a waiting game since. Lately I’ve been wiggling it with a little bit more gusto than usually, to the point where she wouldn’t let me “check it” anymore.  Today the kids were playing and she ran in yelling, “MY TOOTH CAME OUT!!!” 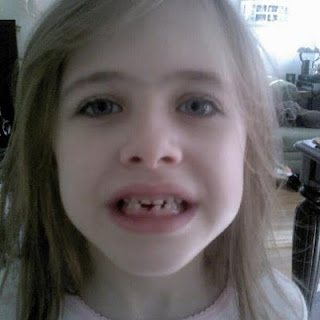 I was so excited for her; I asked “Where is it?” She didn’t know. (I won’t tell you the spew of profanity that went through my head) So I had to break into CSI Mom mode. One thing to know about the Kraus Kids is when I’m trying to do something that needs concentration or requires my close attention that’s when they really shine as complete irritants (I could really use some colorful phrases here but I wanted to keep it clean).  I needed to call in reinforcements, so I start yelling (loud, like something was really wrong loud) for Ted. Most of the time I just go get him, but since my four legged companion was hot on my tail (I didn’t want her to eat it) along with the kids, I was working with a small window of opportunity and I needed him quick.
Ted comes in and congratulates Maizie and we start looking for the tooth. He tries to get some information from her, but she could drive a CIA interrogator to tears with her lack of answers. I asked if she swallowed it, well you would have though I asked if she needed the puke bowl, she was so offended. Getting Teddy to stop jumping around and actually take the dog outside took asking three times and Stella just sat at her desk; I think she might be jealous, she knows Maizie is getting money tonight and she loves getting money. Then the chore of trying to find a “torch” as Teddy calls it (he watches a lot of British cartoons), because of course it’s not where I left it. (“Colorful language”)
Maizie’s starting to worry we won’t be able to find the tooth, but Ted told her that the Tooth Fairy will still come even if we can’t find it. She’s nervous because her mouth feels funny. Her brother’s jumping around like a fool and her sister is sitting there probably plotting how to jump the Tooth Fairy. Within two minutes, we find the tooth. Now to put the tooth somewhere where I’ll remember where I put it and where they can’t get it. 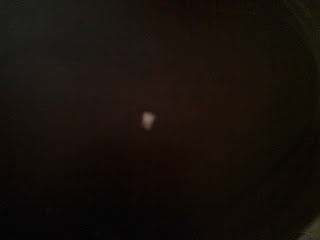 This loss is causing her stress. She says she can’t eat until the new tooth grows in (going to be quite a while for that to happen) and says she can’t even eat macaroni. She said she’ll just have milk, that’s all she has any way, she drinks close to half a gallon a day. Then she came in and told me her “mouth doesn’t feel right”. I had her go look and see the tiny spot of white where the new tooth is coming in; it made her feel a little bit better. Hopefully cold hard cash will soften the blow of losing body parts. 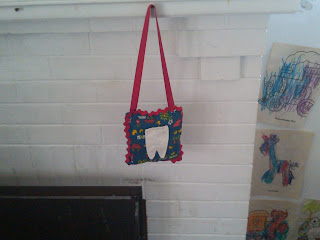 We have a Tooth Fairy pillow that my grandmother made me and my sister, since my kids are such light sleepers I added a ribbon to hang on the bed. Now the hard part will come, removing the tooth and paying up with waking any of them up (all three share a room). After making sure they are all asleep, someone is always awake. I have to hope Alabama doesn’t wake her up like she does oh so often.
Ted and I were joking about how we were going to find Stella with a pair of pliers trying to pull out her own teeth, she can’t be left out of a money making operation.