Skip to content
Now let me start by saying I DO NOT get paid to promote products, but if you know me when I like something I let you know about it.
Teddy is a big believer in commercials. Whatever they say has got to be true and we (I) MUST buy it. The commercial for the Lysol No Touch Kitchen System came on and he was SOLD. Every time the commercial came on, he called me in to watch. When he saw a coupon, he had me cut it out (I would have anyway). Well I was at Wal-Mart last week and there was a display in the middle of the aisle for the starter kit and I had a coupon for it, so I figured “Why not?” 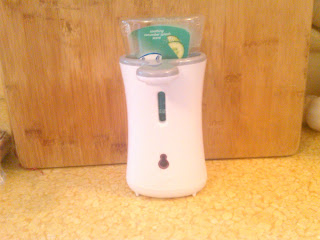 I gave specific instruction that it was only for me, and Daddy, to use simply for the fact that they would use it to clean EVERYTHING in the kitchen and it would be gone within the hour. Well let me tell you how handy that little gadget is.
I cook, cut and prepare a lot of chicken and it skeeves me out so I was me hands all the time. I am absolutely paranoid about salmonella. I would go so far as to wash the top of the soap dispenser and the faucets when I was done cooking. You don’t touch a thing. It reminds me of the sink my mom had at work in the hospital lab. The only thing is, if you go to move it, do it from the back so you don’t trigger the dispenser if not you’ll have soap all over your hands, Now I just need a touch faucet.