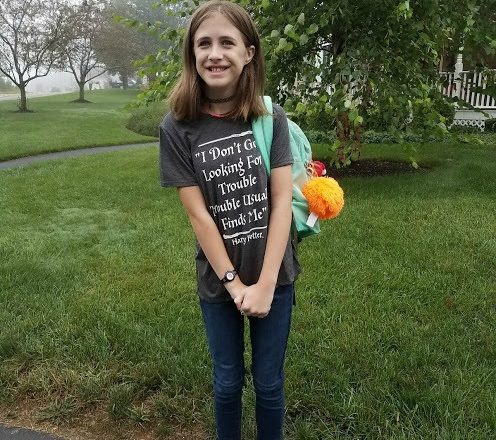 Seriously middle school, what have you done to my daughter?

The week before school was tough. We had some high anxiety moments with some breakdowns. But then the day came, the first day of school.

Years past she would struggle to get up in the morning. There would be fights with her siblings. We would argue about her pulling herself together so she could get downstairs on time.

The night before she will pick out her clothes. She will even wear jeans again…it’s been four years since she’s worn them.

I don’t take her to school. For the first time in her life, she takes the bus. On the second day, she completely ditched me and now goes to and from the bus stop by herself.

The girl that suffers from anxiety, is starting to become social. She is even willing to approach the “really shy” girl in her class.

You know what, she even decided to play the clarinet. Even when she’s the one to make it sound like a goose, she keeps playing.

After school activities start next week and even though she says she doesn’t want to do any, she will. Once she sees all the kids that are involved, she will want to be too.

WHAT IS THAT ABOUT??

This is not the same girl, so middle school I would like to thank you.  You have opened her up and let her expand her closed up world.

39 thoughts on “Middle School…What Have You Done to My Daughter?”