A few weeks ago I wrote about the things that I wanted to do while my sister and I were in New York City for some blogger conferences. We did most of the list.

Dylan’s Candy Bar- We went there and I finally got the Bean Boozled jelly beans for my kids, I couldn’t find them anywhere in Rhode Island. They were able to do the challenge. I also sent them a giant box of candy that arrived before I got home. Ted said they were flipping out!

Sprinkle’s- Guess what, I was not meant to get a cupcake from the ATM. We got there and it would be 30 minutes while they refill it. Someday, Sprinkle’s, someday.

Big Gay Ice Cream – I have been craving it since we left. I was SO GOOD!!!! I ordered American Globs, vanilla soft serve (I prefer soft serve) covered in chopped pretzels (not tiny ones either) then drenched in chocolate. Oh sweet mother of pearl, it was so worth the trek to the West Village.

Chelsea Market – So much goodness in there. But, the highlight of being there was when Tami chased down Wallace Shawn. If you don’t think you know who he is, guess again. Since The Princess Bride is our all time favorite movie, Tami and I got a picture with him. Mr. Shawn, sorry she chased you down, but thank you for the highlight of our trip.

The High Line – What gorgeous views, and so many spots to sit and relax. It was a relaxing walk and it seemed much shorter high above the street. I probably would have enjoyed it more if it wasn’t 117 degrees outside (it really wasn’t, but it was hot).

Mood – We popped into Mood while we were on our way back to our hotel after our pub crawl (more on that later). I grabbed Maizie a tote bag and she has been carrying it around like it’s filled with gold.

Central Park – By the time we were near the park it was kind of dark and neither one of us wanted to be the subject of an SVU episode, so we decided not to go.

The Subway – I loved riding the subway! Once I figured out if we needed to go uptown or downtown, we were like pros. Unfortunately I didn’t see any interesting characters while on it.

Minus 5 Ice Bar – As much as we wanted to go, we couldn’t fit it into our schedule. I will go there someday!

There were places we went and things we did that weren’t on the list.

Bloomingdale’s – Tami needed to get new shoes while we were there and as we came out of the subway she saw Bloomingdale’s. So, in we went. Did you know that if you are visiting from out of town you can show you license and get a coupon?

Pub Crawl – We happen to have gone until 3:30pm on Wednesday only eating a box of Mike and Ikes. By then we were STARVING so we went to have a bite to eat. Of course we had a beer with our burgers. Then we noticed Happy Hour started a 4pm and beers were only $4. Being good Irish girls; we ordered another (once it was past 4pm). We were headed back to our hotel and saw another drinking establishment that we HAD to go patronize. We started our own little pub crawl.

Eating Al Fresco-We ate outside at a Mexican restaurant. It was just like you see on TV. Of course, because something is always going on in NYC there was construction going on at the corner where we ate and another restaurant down the block had it’s fire alarm going off constantly.

We headed to a very crowded Times Square a couple of times, because it was only a couple of blocks away and why not? 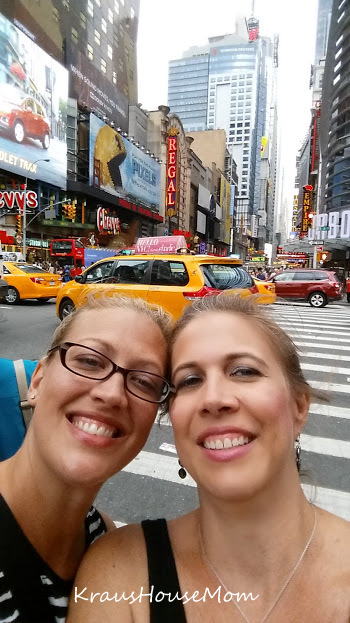 While we were walking in Chelsea, Ty Pennington walked by us. Tami was too busy looking at the tiny dog next to us, because she probably would have chased him down as well.

After a few days and approximately 50,000 steps, we were ready to head home. Next time we will conquer more of the Big Apple (I’m coming for you Sprinkles!)