Skip to content
We went to Teddy’s Kindergarten orientation this morning and he had been worried about this for a week. He knows the teacher because Maizie had her last year and he been in the classroom on visits, but this time it’s his teacher and his classroom. He made sure his hair was done and we gave him some pointers on what NOT to say (like he was Malfoy or that he was a wizard, that doesn’t usually go over well).
We got there and the teacher starts to laugh and wants to show us something she found while she was setting up the room. At some point last year, Maizie used the stick on letters and wrote her name on the classroom window, backwards. Apparently there were no more I’s so she turned an H and used that for the second I. The teacher saved it for us to see.
There was a scavenger hunt for the kids to do. Teddy had a distinct advantage over the other kids; Maizie was showing him where everything was. She was walking around like she was queen of the classroom. When the scavenger hunt was completed, you could turn it in for a coloring book and a box of crayons.
Stella is a crayon junkie. If she sees them, she needs them; it’s an uncontrollable urge for her. I had put them in my bag and she kept asking if she could hold my bag. I told her I was good, then she offer to just hold the coloring book and crayons, this is when I started to realize we were going to have a real problem. Since we were getting ready to leave I let it go.
We pull into the driveway and she immediately offers to carry my bag, I started to laugh. We get into the house and she goes right into the bag and takes out the crayons and coloring book. I asked what she was doing and she said, “I’m just going to put these on my desk in case Teddy wants to use them.” Having them just sitting there, a brand new box of crayons and a new coloring book, was just killing her. A few minutes later she brings him the coloring book and even takes out a crayon for him to use. She showed him where to color and what to do. Ut oh, he colored outside the line (how dare he) she did the only thing she could, she took his coloring book and crayons away from him. Teddy was able to use (touch) his coloring book and crayons for a grand total of ten seconds. 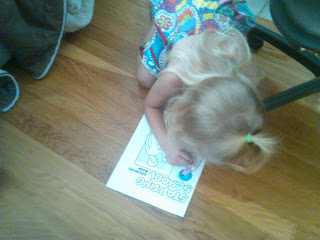