Skip to content
Let’s discuss Alabama Worley (bonus for you if you know where her name came from). She is a rescue dog, a black lab from Western Tennessee. While I was pregnant with Stella, we discussed having a fourth child, but Stella put the kibosh on that idea. Little did I realize I was indeed getting a fourth child the day we picked Alabama up at that rest area. When we brought her into the house Stella (9 mos) screamed, Teddy (2yo) cried, and Maizie (3yo) gave her a huge hug; she licked them all, sniffed around and then flopped on the floor…she was home. 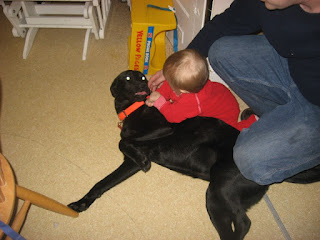 Alabama is a quirky dog. She has her own neighborhood watch, even though she’s the only member. She likes to watch the neighborhood like Mrs. Kravitz from Bewitched and she sometimes suffers an identity crisis. There are times I think she believes she’s a cat, she likes to lay on the back of the couch and look out the window. Whatever you do, don’t leave the room and not bring her with you; she will either get to you or cry and whine until you come get her. 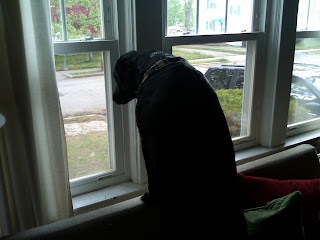 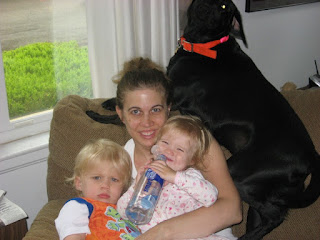 She really thinks she’s one of the kids. When we call the kids, all four of them come running; when we tell them to stand in a line, she stands next to them. Alabama likes to spend most of her time with me, when I turn around, there she is. If everyone else is awake and downstairs, she’ll still be in bed with me.
Every time I’m eating something on the couch, she comes and gets her face as close to me as possible; I mean drool all over my leg or arm close. The thing is I don’t feed her from the couch. She doesn’t understand NO, just doesn’t get it. If you try to pet her, she flops on her back and slaps you with her paws. Forget about me sitting on the floor, that’s just an invitation to walking all over me, for real.
She does some of the dumbest things I have ever seen, but then she has flashes of genius. My nephew used to take her running with him, until she figured out that when she wanted to stop all she had to do was wrap the leash around every tree or pole until it completely pissed him off and they came home. Or the day Ted bought turkey jerky; she sniffed it out through a closed door, got in the room, found it on his desk in his office, got it down and had some. 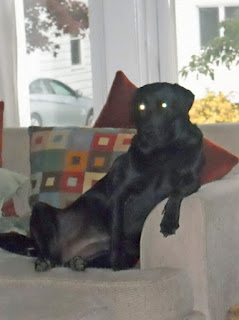 Alabama is also a very agile dog. I have seen her run from the back door and almost make it over a fence using the neighbor’s garage and a tree going at it Mario style (if you ever needed to get up a wall in Super Mario Galaxy you know what I’m talking about). She’ll move furniture in order to get a bone that got stuck, but won’t lay down when you ask. But…she knows what “good girls get”. 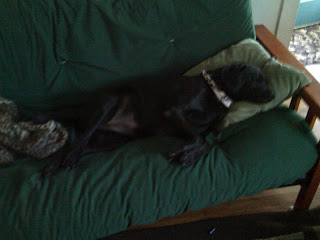